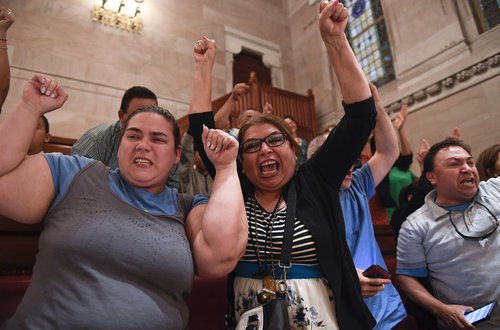 New York Gov. Andrew Cuomo signed a bill Monday that will allow undocumented immigrants to obtain driver's licenses in the state. The measure passed its last hurdle earlier in the day with a "yes" vote in the Senate.

The Senate approved the Green Light Bill with 33 votes to 29, and the result was met with cheers and shouts from the gallery.

Senator Luis Sepulveda, D-Bronx, the bill's original sponsor, was emotional on the Senate floor, where he stood with his young son.

"We are taking a stand for the rights of immigrants in a time where their livelihoods are being threatened and degraded to extreme degrees," Sepulveda said.

"As New Yorkers, we have an obligation to defend other New Yorkers," Gustavo Rivera, D-Bronx, said on the Senate floor. "And every one of these individuals, whether they're documented or not, are New Yorkers."

Cuomo had initially been concerned that the legislation might give federal officials information about undocumented individuals that could lead to deportation, but New York Attorney General Letitia James said Monday that there are "safeguards" in the bill against that.

"The legislation is well crafted and contains ample protections for those who apply for driver's licenses," James said in a statement. "If this bill is enacted and challenged in court, we will vigorously defend it."

Cuomo has supported this policy for more than a decade, according to a statement from his office.

"The key to this bill is not the political intent but the legal effect," the statement said. "We hope the Attorney General's assessment is correct for the safety of the thousands of undocumented individuals who are relying on her legal opinion."

Sen. Sepulveda said the legislation is mainly "for the children."

"I have my child here. And the thought of losing my child because of a traffic stop, because of running a red light, would kill me," he said.

Addressing New York's undocumented community, Sepulveda said, "We see you. We welcome you with open arms. You are here, and today we give you the right to move freely around this state without fear."