Most rabies infections in the United States come from bats, CDC says 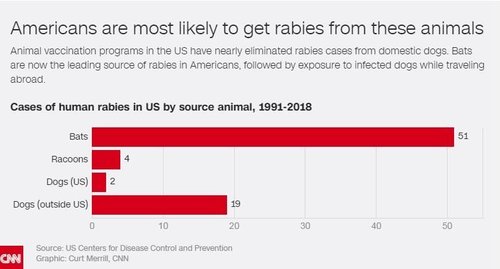 In the United States, the culprit behind most rabies cases has shifted from dogs to bats. The flying mammals now cause 7 out of 10 US rabies cases, according...

In the United States, the culprit behind most rabies cases has shifted from dogs to bats. The flying mammals now cause 7 out of 10 US rabies cases, according to a report from the Centers for Disease Control and Prevention.

Researchers looked at rabies trends in the United States over the span of 80 years, from 1938 to 2018. They found that most infections came from dog bites until 1960, when wildlife species -- specifically bats -- became the primary source for human infection. This followed nationwide efforts in the 1950s to mandate pet vaccines and implement leash control laws, the report stated.

'Reducing rabies in dogs is a remarkable achievement of the U.S. public health system, but with this deadly disease still present in thousands of wild animals, it's important that Americans are aware of the risk,' CDC Director Dr. Robert Redfield said in a news release.

Once a person becomes infected, rabies is nearly always fatal without treatment. The number of deaths in the United States ranged from 30 to 50 per year in the 1940s but has since dropped to one to three deaths per year. That's the result of routine pet vaccination and availability of post-exposure treatment with vaccine and immune globulins, proteins that trigger the body's defense system to fight off infection.

'We wanted to write a report to raise people's awareness that rabies is still an issue. ... It's still one of the most deadly diseases on the planet,' said Dr. Emily Pieracci, a CDC veterinarian and lead author of the report. 'If you get post-exposure prophylaxis and you get that before the onset of signs or symptoms of rabies, you can prevent the disease.'

How to prevent rabies

Rabies is a virus that infects mammals. When an infected animal bites a human, rabies is transmitted from saliva, through the open wound and into the nerves, where the virus goes to the brain and spinal cord. This process can take between three and 12 weeks. Before the virus gets to the brain, a person may have no symptoms or only mild symptoms like fever, weakness or discomfort. At this stage, a person can get post-exposure treatment and still survive.

But once the virus gets into the brain, it multiplies and passes through glands that make saliva, becoming over 99% fatal. At that point, a person can show symptoms like confusion, abnormal behavior, hallucinations, insomnia, drooling, difficulty swallowing and hydrophobia, fear of water. Most people die within one to two weeks of these late symptoms. That's why CDC experts recommend seeing a doctor for post-exposure treatment soon after contact with an animal, before the virus has the chance to turn fatal.

In the United States, most human deaths from rabies occur because people don't seek medical treatment, probably because they are unaware of the animal contact. For example, bat bites can be smaller than the top of a pencil eraser, the CDC said.

'We've been seeing cases in people in the United States who seem to not really be aware that rabies can be transmitted by wildlife, especially bats,' Pieracci said. 'A lot of times, bat bites and scratches are very tiny. So a lot of people will try to hold a bat and they don't realize that bat has bitten.'

Healthy bats try to avoid contact with people. But those infected with rabies will act differently, being active in the day or stumbling along the ground. In these cases, people can contact their local animal control office or wildlife rehabilitation center. Pieracci said people should avoid touching all bats, regardless of how they appear.

If you happen to wake up with a bat in your immediate surroundings, you should assume rabies exposure and seek medical care right away, the CDC recommends.

Although wildlife exposure is the most common cause of rabies death in the United States, globally, infected dogs cause 98% of the 59,000 human deaths each year. Americans who travel internationally should research rabies risk at their destination and avoid contact with dogs, have travel insurance to pay for treatment, if needed, and consider pre-exposure vaccination, the CDC report advised.

Of the more than 1 million dogs imported to the United States every year, 10% come from countries with a high risk of rabies. There have been three US rabies cases reported from imported dogs since 2015.

How rabies is treated

In 2018, about 55,000 people in the United States received post-exposure treatment for possible rabies, though some may not have had contact with an infected animal. Even if the animal couldn't be captured to confirm rabies, people who were bitten by a suspicious animal got post-exposure treatment because the disease is so deadly, Pieracci said.

Oral rabies vaccines for wild animals have been used to control the spread of the disease from raccoons and coyotes. The program, run by the US Department of Agriculture, started in the 1990s and was successful in preventing the spread of raccoon rabies westward.

The vaccine is put into a packet and covered in flavored bait such as egg or fish to attract animals. The packets are dropped by airplane or by hand, along roads. Once the animal bites into the packet, they consume the vaccine inside and are protected against rabies.

There are no vaccines or management programs to control rabies in the bat population.