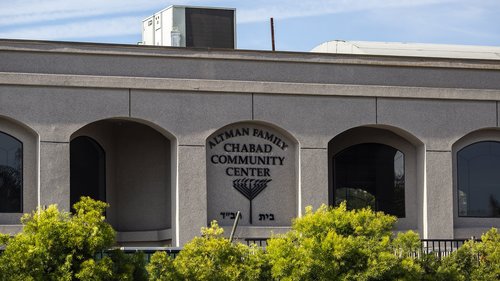 A federal judge on Tuesday entered a not guilty plea for the 19-year-old California man who faces 109 civil rights and hate crimes charges in connection with...

A federal judge on Tuesday entered a not guilty plea for the 19-year-old California man who faces 109 civil rights and hate crimes charges in connection with a deadly shooting at a synagogue last month.

John Earnest is accused of intentionally obstructing by force or threat the victims' right to exercise their free religious beliefs. He is being held in state detention without bond.

Escorted in by federal marshals, Earnest wore a dark blue jail jumpsuit, and was shackled at his wrists, ankles and waist. He was emotionless, briefly whispering with his attorney, with a plain expression on his face. He responded to the judge only with answers of "yes."

Earnest is accused of carrying out the deadly shooting at the Chabad of Poway synagogue that killed 60-year-old Lori Gilbert Kaye and wounded three others, including the rabbi and an 8-year-old girl. He is also suspected of arson at a mosque in nearby Escondido in late March.

Because there were 54 people in the synagogue when Earnest allegedly attacked, he faces 54 counts of obstruction of free exercise of religious beliefs resulting in death and bodily injury and involving the attempt to kill. He also faces 54 hate crime counts, and another charge of damage to religious property in connection with the case of arson at the Escondido mosque.

A preliminary hearing, where prosecutors will have to show probable cause for a trial, is set for May 28. An arraignment is scheduled for June 4.

Earnest also faces state charges of murder, attempted murder and arson. In April, his court-appointed public defender entered a not guilty plea on his behalf and denied the allegations. The cases are proceeding simultaneously.

The suspect then turned the rifle toward a room full of congregation members and wounded 8-year-old Noya Dahan, and Noya's uncle, Almog Peretz, 34, Trinh said.

Earnest fired eight to 10 bullets before his rifle appeared to either jam or malfunction, Trinh said.

Federal prosecutors allege in their complaint that as the shooter fled the scene, he called 911 from his car. He told them: "I just shot up a synagogue. I'm just trying to defend my nation from the Jewish people. ... They're destroying our people. ... I think I killed some people."