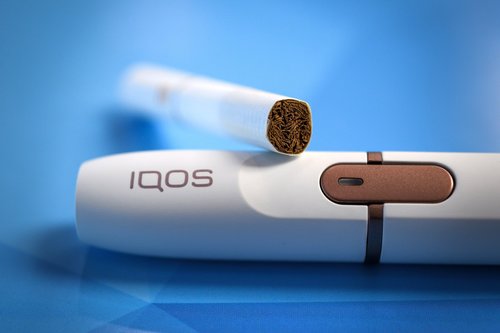 An electronic tobacco device may now hit the US market after getting a green light from the US Food and Drug Administration, the agency...

An electronic tobacco device may now hit the US market after getting a green light from the US Food and Drug Administration, the agency announced Tuesday.

The agency made clear that it has not deemed the device -- Philip Morris International's IQOS "tobacco heating system" -- to be safe. And its decision to permit sales is not tantamount to FDA approval.

The device is not an e-cigarette or vape like the ones that have surged in popularity among middle and high school students. Rather, it's a noncombustible device that heats, without burning, "tobacco-filled sticks wrapped in paper to generate a nicotine-containing aerosol," the FDA said.

The agency said the move followed "a rigorous science-based review," after which it decided that the product may have public health merit in part because the device contains "fewer toxic chemicals than cigarette smoke, and many of the toxins identified are present at lower levels than in cigarette smoke."

Critics have expressed concerns about such research being widely company-funded.

"Ensuring new tobacco products undergo a robust premarket evaluation by the FDA is a critical part of our mission to protect the public, particularly youth, and to reduce tobacco-related disease and death," Mitch Zeller, director of the FDA's Center for Tobacco Products, said in a statement Tuesday.

Moira Gilchrist, vice president of strategic and scientific communications for Philip Morris International, said the FDA's decision was a "milestone" that would allow the company to bring its product -- which is sold in other countries -- to US smokers.

The company says it expects to be distributing and marketing IQOS in approximately 90 to 120 days, starting in Atlanta.

But the FDA's decision raised eyebrows among health advocates. Some are concerned that the product could spread among kids, similar to vaping devices such as Juul.

The decision also comes less than a month after Dr. Scott Gottlieb, who took a strong stance against underage tobacco use as the agency's commissioner, stepped down, prompting questions about how aggressively the agency would continue to pursue the issue under new leadership.

Without strict FDA oversight, "there is a serious risk that IQOS will become the next Juul and worsen the current youth epidemic," Matthew L. Myers, president of the Campaign for Tobacco-Free Kids, said in a statement Tuesday.

He said his organization has repeatedly "raised concerns with the FDA that Philip Morris International has marketed IQOS in other countries in ways that clearly appeal to kids, including through social media, sponsorships of events like beach parties and fashion shows, and slick stores and kiosks that look like they're selling tech gadgets, not addictive tobacco products."

Robin Koval, president and CEO of the Truth Initiative, said in an e-mailed statement that "the introduction of another nicotine delivery device to the U.S. market while we are in the midst of a youth e-cigarette epidemic is concerning."

Harold Wimmer, president and CEO of the American Lung Association, said in a statement that he's "deeply concerned" about the product's potential health impacts.

"The Lung Association urges the FDA to carefully monitor how this product is actually being used -- and by whom," Wimmer said. "FDA must take steps to protect youth from beginning a tobacco addiction with this product."

The FDA said it will keep tabs on what happens as the device hits the market, including any uptake among youth. If this happens, it could be grounds for the agency to reverse its decision.

"We'll be keeping a close watch on the marketplace, including how the company is marketing these products," Zeller said. This includes complying with regulations intended to prevent kids from being exposed to the product -- on websites and social media, for example.

The agency will also require that package labels and ads warn about the product's addictiveness. And the tobacco company can't market the devices "with claims of reduced exposure or reduced risk," the FDA said. In order to do that, the company has a separate application in the works.

Philip Morris International has put its weight behind IQOS as more smokers have ditched traditional cigarettes, affecting sales. In the first quarter of 2019, the company had "more than 10 million IQOS users worldwide," CEO André Calantzopoulos previously said in a statement. In that period, the shipment volume of its so-called heated tobacco units grew 20.2%.

The company's interest in smoke-free alternatives to cigarettes is part of a sector-wide shift. Last year, tobacco giant Altria took a 35% stake in Juul in a deal worth $12.8 billion.

Altria, which spun off Philip Morris International years ago, will now be distributing IQOS under an exclusive agreement with the company.

Car chase leads to a three-car collision in White City

A teen raised $10K to install a community baby box. Less than a year later, a newborn was found inside