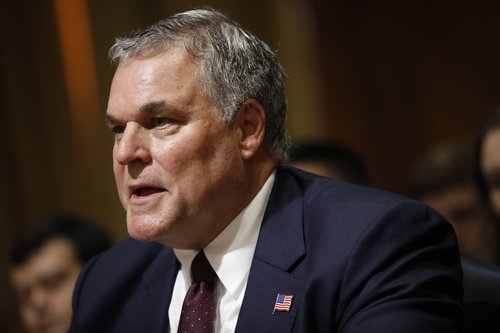 House Ways and Means Chairman Richard Neal gave the IRS until 5 p.m. to respond to the request, appealing directly to the tax agency after Treasury Secretary Steven Mnuchin -- who oversees the IRS -- stepped in to decline a similar request earlier this month citing ongoing consultation with the Justice Department.

The Massachusetts Democrat has indicated that defying his request -- as the IRS is expected to do -- would be interpreted as noncompliance and lead to an escalation in the standoff between the administration and House Democrats over the President's financial records.

Democrats argue that it is up to Rettig, a Trump appointee, and not Mnuchin to release the returns.

"It is not the proper function of the IRS, Treasury or Justice to question or second guess the motivations of the committee or its reasonable determinations regarding its need for the requested tax returns and return information," Neal wrote to IRS Commissioner Charles Rettig. "Please know that if you fail to comply, your failure will be interpreted as a denial of my request."

But Rettig said in a recent hearing that Mnuchin is his boss, and Mnuchin has made clear that he has no plans to hand over documents any time soon.

Mnuchin told reporters earlier this month that it would be "premature" to conclude how long the agency's review with the Justice Department could take given the complexity of the legal issues. He also called Tuesday's deadline "arbitrary."

"I'm not going to make a commitment prematurely as to whether we will be able to conclude our legal review within that deadline or not," said Mnuchin when asked by CNN. "Obviously, given the importance of this issue we have people working on this diligently. But again I would emphasize this is a decision that has enormous precedence in potentially weaponizing the IRS."

The President's personal lawyer, William Consovoy, has sent two letters to the Treasury Department urging them not to relent, arguing that Neal reached beyond his congressional authority under the law.

Consovoy also filed suit Monday on behalf of Trump and his family business, the Trump Organization, to block a separate request from the House Oversight Committee, chaired by Maryland Democrat Elijah Cummings, for a decades' worth of financial records from Trump's accounting firm Mazars.

Trump has broken decades of presidential precedent with his refusal to release his tax returns, first as a candidate and since taking office. He has also maintained his stake in his family real estate business, now overseen day-to-day by his adult sons Don Jr. and Eric Trump, opening himself to challenges that he is violating the constitutional ban on presidents taking gifts or money from foreign governments or US state entities.

Since taking control of the House in January, Neal has spearheaded Democratic efforts to obtain Trump's tax returns using an obscure statute created in the wake of the Teapot Dome bribery scandal under President Warren G. Harding.

Democrats are steadfast in their belief that Neal has the power under IRS code 6103 to request any individual's tax information, including Trump's. The law states that three people -- the House Ways and Means Chairman, the Senate Finance Committee Chairman and the chief of staff of the Joint Committee on Taxation -- have the power to request the tax information in order to conduct their own legislative business and that the Treasury Secretary "shall furnish" the information.

The statute has been used by Congress before and was used in a high-profile case when Congress investigated whether the IRS was discriminating against conservative groups applying for non-profit status. Request for information using 6103 are also made on a regular basis for research purposes by JCT.

Neal argues that he needs Trump's taxes in order to conduct oversight of the IRS's presidential audit program, both to understand how the IRS is using the program and see if the program needs to be codified into law.

Trump's lawyer has argued that Neal is only using the presidential audit program as a pretense to embarrass the President and release Trump's private information to the public.

"Congress has no constitutional authority to act like a junior-varsity IRS, rerunning individual examinations or flyspecking the agency's calculations," Consovoy wrote to Treasury last week.

A lengthy legal battle is expected

The administration's denial of the request is expected to spark a lengthy legal battle over the 6103 statute, which has never been scrutinized in the courts before. The fight will also be a rare example of Congress suing the executive branch for information, and could go on for months or even years.

The most recent example was in the "Fast and Furious" scandal, named for an Obama-era gun-walking program overseen by the Bureau of Alcohol, Tobacco, Firearms and Explosives that left a Border Patrol agent named Brian Terry dead.

In 2012, the House voted to hold then-Attorney General Eric Holder in contempt of Congress and the House Oversight Committee sued the Obama administration for information related to the program, but it wasn't until 2014 that the court ruled the administration had to hand over additional documents. Even so, the squabbling over documents continues today.