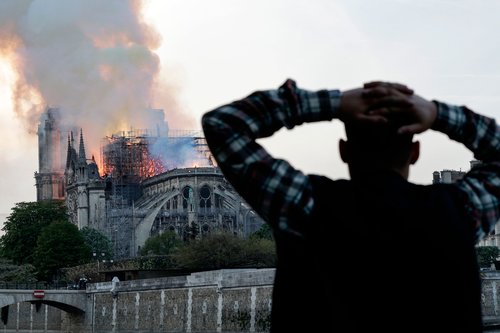 Thibaud Binétruy was walking home Monday when he saw smoke rising in the distance. Notre Dame Cathedral, the beloved landmark in the heart of Paris,...

Thibaud Binétruy was walking home Monday when he saw smoke rising in the distance. Notre Dame Cathedral, the beloved landmark in the heart of Paris, was engulfed in flames.

"It's awful to see such a symbol disappearing in front of you. It's been there for so many years and in a few minutes half of it disappears... crazy," Binétruy told CNN.

His words echoed the anguish and disbelief felt by many Parisians as they watched the historic structure burn. CNN correspondent Hadas Gold said people crowded the banks of the Seine to gaze helplessly at the unthinkable.

Many Parisians, who grew up with the gothic structure towering over the river, burst into tears and hugged each other as the church succumbed to flames and billowing clouds of smoke.

The city was eerily quiet, save for the helicopters and fire trucks. Katherine Finney said she and other onlookers couldn't even comprehend what was happening at first.

"I could see that the spire was on fire and thought that there was no way that it was the Notre Dame," Finney told CNN.

But as the historic cathedral continued to burn, crowds let out audible gasps and groans.

"There were lots of people all gathering around. Everyone was really quiet," said Finney, an American tourist who has visited the cathedral multiple times.

When the cathedral's spire fell, everyone around her screamed. Some people were even moved to tears.

"It's the saddest thing I've ever witnessed -- the crowd standing there, a lot of people crying," Finney said. "It was just a horrible tragedy."

Even so, some Parisians -- still tender after a series of deadly terrorist attacks in the French capital in 2015 -- showed resilience Monday in the face of disaster. Some sang the French national anthem, while others gathered at the city's bistros to share meals and drink wine as the cathedral continued to burn.