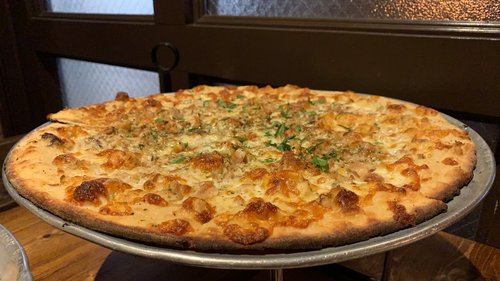 An actor and two other people face 20 years in prison after they confessed to trying to extort $198,000 from a former New York pizzeria owner in a plot feder...

An actor and two other people face 20 years in prison after they confessed to trying to extort $198,000 from a former New York pizzeria owner in a plot federal officials described as similar to a mob shakedown.

The incident started last year after the victim sold his pizzeria in a building he owned to Singer, the US Attorney's Office for the Eastern District of New York said in a statement.

From there, the business deal turned into a scene from a mobster movie, complete with a muscle man in a dark outfit and sunglasses.

The three carefully scripted an intimidation plot to force the victim into giving them $200,000, said Richard P. Donoghue, United States Attorney for the Eastern District of New York.

A threat and a flash of a prop pistol

Court documents described how the incident played out when Wilson, Singer and Wood rolled up to the pizzeria in November last year after planning the extortion plot for months.

Wood said she worked for an organization that handles Singer's business relating to the pizzeria, according to court documents.

She told the owner that he owed the organization $198,000, a figure she said she got as a result of costs such as equipment and renovations, and purported operating losses incurred by Singer. She demanded payment the same day.

In an attempt to intimidate, Wood showed the victim photographs of his spouse and children and told him it would be in the best interest of his family for him to pay up, the documents said.

During the conversation, Wilson -- described as a professional actor in court documents -- leaned toward the victim to expose a pistol holstered on his hip. Wilson had been recruited to play the role of a muscle or a bodyguard, court documents said.

The victim reported the incident to the authorities and an investigation revealed a series of messages among the three showing how they planned the alleged extortion.

An 'acting gig' and an all-black outfit

Before the meeting at the restaurant, the three exchanged a slew of messages by phone and Facebook to plan the extortion, court documents said.

"I need a couple of guys to escort my associate [Wood] while she delivers a demand to my landlord. You will simply have to stand in the background and appear to be muscle," the message said.

For the role, Singer asked Wilson to wear a dark suit with no tie, a white shirt and dark sunglasses, court documents said. When everyone was on board for the plot, Singer sent a message to the trio saying, "Let the games begin!"

Their excitement was short-lived.

On December 14, FBI agents executed a search warrant at Wilson's home and found a black prop pistol and the leather jacket he was seen wearing on surveillance footage during the pizzeria meeting, federal officials said.

"A group of people doing their best to act like a group of mobsters, shaking down a pizzeria owner, will now face a steep price for what they described as 'kinda fun,'" said William F. Sweeney Jr. of the FBI New York field office, who announced the guilty plea.

"Business owners who are trying to make an honest living shouldn't have to fear someone with no legal power over them extorting and threatening their livelihoods."

Suspect in custody after hours-long armed standoff near Chiloquin

Georgia held a contest for better highway safety signs. The winners are hilarious

A dog gives birth to a green puppy, now named 'Hulk.' Here's the science behind it

A 6-year-old is making clay koalas to raise money for the Australian fires. He's raised over $20,000

2 Honolulu police officers were shot and killed when they answered a call for help. Then the house they responded to went up in flames