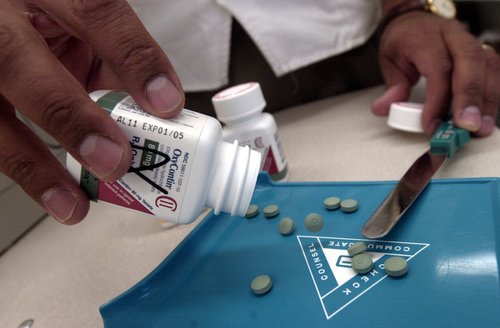 The lawsuit alleges that six manufacturers, including Purdue Pharma -- along with eight members of the Sackler family, which owns the pharmaceutical giant that manufactures the painkiller OxyContin -- engaged in false and deceptive marketing practices. The suit also alleges that opioid distributors failed to prevent their drugs from getting into the wrong hands.

The lawsuit seeks to make the companies change their business practices and to get financial compensation for the state of New York, part of which would fund prevention programs and addiction and medical treatment for those affected.

It expands on an August lawsuit filed by the New York attorney general's office against Purdue Pharma and sets forth the attorney general's findings from what it referred to as "a multi-year, industry-wide investigation of these opioid market participants."

According to the complaint, more than 130 people in the United States -- about nine of them in New York -- die as a result of opioid-related overdoses each day. More than 3,200 New Yorkers died of opioid overdose in 2017, the office says.

More than 2 million Americans were dependent on or abused prescription painkillers in 2014, according to the US Centers for Disease Control and Prevention.

"The opioid epidemic has ravaged families and communities across New York," Attorney General Letitia James said. "We found that pharmaceutical manufacturers and distributors engaged in years of deceptive marketing about the risks of opioids and failed to exercise their basic duty to report suspicious behavior, leading to the crisis we are living with today. As the Sackler Family and the other defendants grew richer, New Yorkers' health grew poorer and our state was left to foot the bill."

Purdue Pharma denied the allegations in a statement Thursday. "The public announcement of the amended complaints is part of a continuing effort to try these cases in the court of public opinion rather than the justice system," the statement said. "Such serious allegations demand clear evidence linking the conduct alleged to the harm described, but we believe the state fails to show such causation and offers little evidence to support its sweeping legal claims."

A representative for the Sackler family called the claims "baseless."

"Expanding this baseless lawsuit to include former directors of Purdue Pharma is a misguided attempt to place blame where it does not belong for a complex public health crisis. We strongly deny these allegations, which are inconsistent with the factual record, and will vigorously defend against them."

This month, more than 600 cities, counties and Native American tribes from 28 states filed a federal lawsuit in the Southern District of New York against members of the Sackler family, accusing them of creating the opioid addiction crisis through ownership of the company.

The Massachusetts attorney general's office also filed a lawsuit against the family, accusing them of profiting from the opioid crisis through aggressive marketing of OxyContin. Attorneys for the family and for Purdue Pharma have continuously denied those allegations.

Dozens of states have filed lawsuits against opioid manufacturers. James' action comes in the wake of a lawsuit that Purdue settled this week in which the pharmaceutical company agreed to pay $270 million to settle a suit brought by the Oklahoma attorney general. Part of the Oklahoma settlement funds will be used to provide addiction treatment for those affected by opioids.