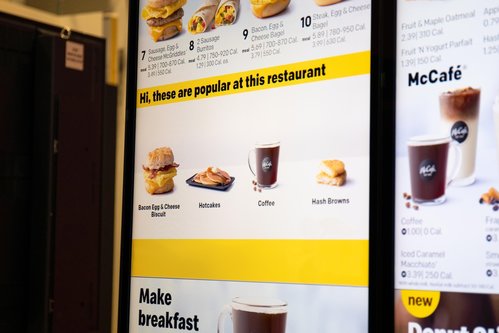 McDonald's is buying a tech startup that it hopes will help it sell customers more of what they want.The fast food giant announced Monday that it is a...

McDonald's is buying a tech startup that it hopes will help it sell customers more of what they want.

The fast food giant announced Monday that it is acquiring Dynamic Yield, an Israeli company that uses artificial intelligence to give consumers personalized experiences.

McDonald's said it would use the startup's technology to tailor the items displayed on menu boards at drive-thru outlets based on the weather, how busy the restaurant is and the time of day. It will also instantly recommend extra items based on a customer's initial order. That approach could help McDonald's boost sales of breakfast or McCafe items, for example.

Food companies have been increasingly turning to digital technology, particularly mobile apps, to learn about their customers' preferences and sell them more of what they like.

Dynamic Yield will expand McDonald's "ability to increase the role technology and data will play in our future," McDonald's CEO Steve Easterbrook said in a statement. It will also increase "the speed with which we'll be able to implement our vision of creating more personalized experiences for our customers," he added.

McDonald's didn't disclose the size of the deal or respond to a request for further information. The Wall Street Journal reported the acquisition was worth more than $300 million.

McDonald's first started testing Dynamic Yield's tech in US restaurants last year. It plans to integrate the platform into its drive-thru menu boards at outlets in the United States this year before expanding it to major international markets. The company also plans to start working on integrating the tech into its self-order kiosks and mobile app.

Dynamic Yield, which has headquarters in Tel Aviv and New York, will remain a standalone business under McDonald's ownership.

The deal marks the latest step in McDonald's aggressive growth strategy, which it announced two years ago.

Tech is a key part of the plan to retain existing customers, bring in new ones and convince people to buy more. Last year, McDonald's tried to persuade consumers to download its app with promotions such as free fries with a $1 app purchase.

Other fast food companies are using tech to try to draw in customers, as well. Burger King ran an app-only promotion that let customers buy a one-cent Whopper when they were within 600 feet of a McDonald's.

More recently, Chipotle offered free cash through Venmo to customers who signed up for its rewards program.