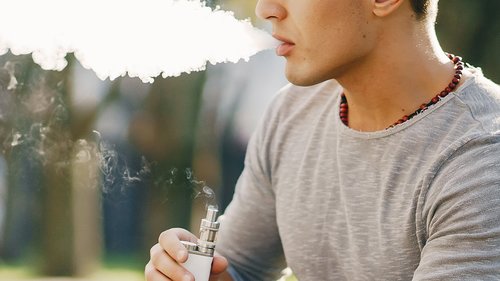 The US Food and Drug Administration released a...

The US Food and Drug Administration released a policy draft Wednesday aimed at preventing e-cigarette products from getting into kids' hands. The result could be that some flavored products are taken off the market.

The draft compliance policy, which is awaiting comments for 30 days and pending finalization, would take action against stores selling flavored e-cig products that are accessible to minors and against websites selling them without verifying buyers' ages and limiting the maximum quantities they sell.

"We expect that some flavored e-cigarette products will no longer be sold at all," as well as some flavored cigars that are included in the policy, FDA Commissioner Dr. Scott Gottlieb said in a statement Wednesday.

The FDA also proposed moving up a key timeline: how long these products can stay on shelves without pre-market review. Instead of requiring e-cigarettes to undergo FDA approval before they could be sold, the agency decided in 2017 that it would allow such products that were on the market before August 2016 to stay on shelves until 2022 without pre-market review. The new deadline to submit those applications would be August 8, 2021.

Public health advocates have called for more immediate pre-market review, however. At an FDA hearing in January, Gottlieb said that requiring e-cigarettes to go down such a regulatory path could be "game over for some of these products." But he maintained that if the prevalence of youth vaping continued to rise, that could prompt the agency to take more extreme action.

Certain flavors are exempted from these proposed changes: tobacco, mint and menthol. Gottlieb has said that he wants to leave the door open for adults, to whom these flavors may appeal more than kids, to quit smoking cigarettes, "but it can't come at the expense of addicting a generation of kids on nicotine," he told CNN in November.

"E-cigarette use among kids has become so widespread, so pervasive, and so troubling, that we risk addicting an entire generation of children on nicotine and watching the dramatic gains we've made in reducing smoking rates be erased," he said in a statement announcing the proposed policy Wednesday.

Alex Azar, secretary of the Department of Health and Human Services, said in a statement Wednesday that his agency "and the entire Trump Administration support a comprehensive, balanced policy approach to close the on-ramp for kids to become addicted to nicotine through e-cigarettes, while allowing for the promise of an off-ramp for adult smokers through access to potentially less harmful forms of nicotine delivery."

But some in the anti-tobacco arena say the new policy doesn't go far enough.

"A public health crisis of this magnitude demands faster and more forceful action than the steps announced by the FDA," Matthew L. Myers, president of the Campaign for Tobacco-Free Kids, said in a statement Wednesday.

Pointing to data showing that roughly half of high schoolers who vape use mint and menthol flavors, Myers said the FDA " should prohibit all flavored e-cigarettes that have not been subject to public health review by the agency, halt online sales of e-cigarettes until stronger safeguards are in place to prevent sales to kids, restrict marketing that attracts kids, and enforce rules prohibiting the sale of new products without FDA authorization." He also advocated a ban on flavored cigars and menthol cigarettes.

"The restrictions on flavored e-cigarettes announced today by the FDA are a step forward, but they are inadequate to reverse the youth e-cigarette epidemic and fall short of prohibiting the flavors that have made e-cigarettes so popular with kids," he said.

Wednesday's announcement mirrors regulations Gottlieb proposed in November, when the FDA revealed that vaping had increased nearly 80% among high schoolers and 50% among middle schoolers since the year before.

The agency has made a number of other moves in recent months to counter vaping among kids, including warning and fining retailers for illegally selling e-cig products to kids. The agency has also expanded its investigation into e-cigarette companies in an effort to uncover whether they are marketing products illegally and outside the agency's compliance policy.

In October, the FDA conducted a surprise inspection of the corporate headquarters of leading e-cig manufacturer Juul in San Francisco, seizing thousands of documents from the company. The FDA has not released the findings of the inspection.

In January, the agency held a public hearing to consider the role of drug therapies to get kids to quit vapes and other nicotine products, with medical organizations and vaping groups weighing in on how to address rising levels of e-cigarette use among youth.

Myers said in December that "The FDA has concluded that the level of addiction it is seeing among youthful e-cigarette users is so disturbing and so unprecedented that it needs to at least ask whether we need a solution that goes beyond what we ever did with cigarettes.

US coronavirus fight enters crucial weeks as the number of cases tops 330,000

How to make your own face mask