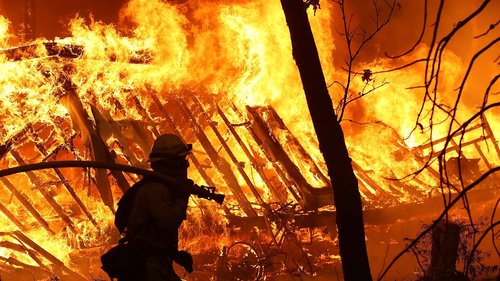 Pacific Gas & Electric acknowledged Thursday that it will likely be found responsible for the...

Pacific Gas & Electric acknowledged Thursday that it will likely be found responsible for the deadliest wildfire in California history.

PG&E, California's largest public utility, said in its latest earnings report that while the cause of the Camp Fire remains under investigation, 'the company believes it is probable that its equipment will be determined to be an ignition point of the 2018 Camp Fire.'

As a result of the blaze, which claimed at least 86 lives and destroyed 14,000 homes, the company said it recorded a $10.5 billion charge ahead of anticipated claims.

The utility previously said it anticipated being found responsible for damages from the Camp Fire and other California wildfires. The expectation of huge losses led to the company filing for bankruptcy last month.

PG&E, which provides electricity to some 16 million Californians, has been under intense scrutiny for how it maintains its infrastructure as officials investigate the Camp Fire's cause.

PG&E pointed out in the report that the California Department of Forestry and Fire Protection (Cal Fire) has identified the blaze's starting point and said it began at about 6:33 a.m. on November 8, not far from a PG&E transmission tower.

Approximately 15 minutes earlier, the company said, the PG&E transmission line nearby 'deenergized.' Later that day, utility workers discovered that a part had separated from the PG&E tower.

Subsequent inspections of this transmission line identified equipment that should have been repaired or replaced, the company said.

PG&E said Thursday it was inspecting its equipment in areas that have a higher risk of wildfires to prevent further incidents.

'The company is taking action right away to address any issues that pose an immediate risk to public safety, in advance of this year's wildfire season,' it said.

A father's concealed weapon went off when he was play-wrestling with his young son, police say. Both were shot in the head

A teen is trying to get the Super Bowl to be moved to Saturday. His petition has received thousands of signatures

The suspect who killed 3 teens drove into them after they 'ding-dong ditched' his home, district attorney's office says

'Bring Your Own' campaign in Talent