Joe Biden says family is on board with a 2020 run, he's 'very close' to decision 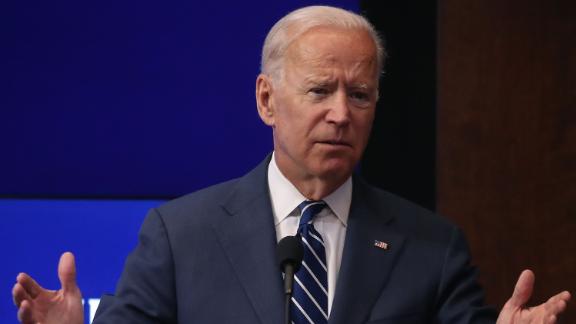 Former Vice President Joe Biden revealed that his family is on board with a 2020 run and he's "very close" to making a decision.

Former Vice President Joe Biden revealed on Tuesday that his family is on board with a 2020 run and he's "very close" to making a decision, his most direct comments to date about his thinking on jumping into the presidential campaign.

Speaking at the University of Delaware, Biden said he has discussed a run with his family, including his grandchildren, noting that the "most important people in my life want me to run."

"The first hurdle for me was deciding whether or not I am comfortable taking the family through what would be a very, very difficult campaign," Biden said during a conversation with presidential historian Jon Meacham. "No matter who runs. It's a very difficult campaign. The primary will be very difficult. And the general election, running against President Trump, I don't think that he's likely to stop at anything, whomever he runs against."

"I am certain about where the family is," he added. "But the second piece is that I don't want this to be a fool's errand and I want to make sure that if we do this, and we're very close to getting to a decision, that I am fully prepared to do it."

Family considerations have long been a part of Biden's campaign calculus, particularly after the death of his son Beau in 2015. Biden decided against a 2016 run as his family was grieving following Beau's passing.

The family's approval of a 2020 run marks major movement in Biden's decision-making process. Speaking to the audience of several hundred, Biden outlined some of the factors he and his team are considering as he mulls a bid -- social media tactics, fundraising plans and establishing a "campaign organization that reflects who we are as a country, made up of women and men, and African-Americans, Hispanic, Latinos, Asian."

"We are also taking a hard look at whether or not it is this alleged appeal that I have -- how deep does it run? Is it real?" he said. "I can die a happy man never having lived in the White House, but what I don't want to do is take people's time, effort and commitment without there being a clear shot that I could be the nominee. I think we can. I think that's where we are. But there are still a couple hurdles to go through to make sure we have all this in place. And if we conclude that, I would announce, and I would run for president."

Biden's team has been quietly working behind the scenes for months laying the groundwork for a possible campaign. His advisers have put together as much of a campaign apparatus as possible without receiving the official greenlight, talking to potential staffers and donors and seeking advice from operatives in key early-primary states like Iowa and South Carolina.

Though Biden says a decision will be reached very soon, it's highly unlikely a formal announcement will come before April, a source familiar with the conversations said.

As Biden talked through his current thinking in Delaware, one person in the audience shouted, "Oh, God! Just say yes!"