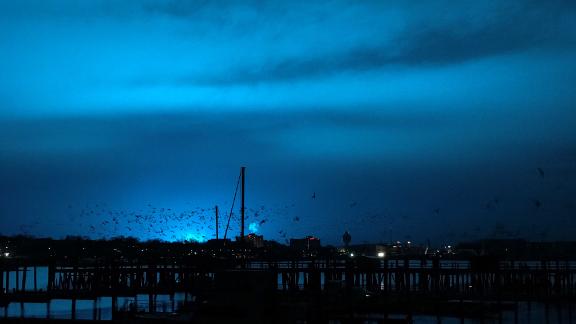 The New York Police Department is investigating an 'arc flash' at a Con Edison substation in Queens.

An electrical flash at a Con Edison substation in Queens temporarily lit up New York's skyline Thursday night in a brilliant blue.

Despite the eerily glowing color, there was no alien invasion.

Instead, the light came as part of an electrical fault that caused an "arc flash," Con Edison spokesman Bob McGee said Friday morning, similar to lightning. There was no fire, he said.

Earlier, McGee told CNN that a brief electrical fire occurred after a "couple of transformers tripped offline" at 20th Avenue and 32nd Street in Astoria.

Also, McGee said Friday there had been no explosion. On Thursday night, the New York Police Department had tweeted about a "transformer explosion" at a Con Edison facility.

The issue caused a transmission dip in the area, and Con Edison crews responded with the New York Fire Department, the power company said.

The fire department did not enter the premises because the "arc flash" was over when firefighters arrived, McGee said.

Loud bangs were probably related to the arc striking the ground in a thunder-and-lightning effect, he said. The flash went from a piece of equipment 20 feet high to the ground, he said, and that's what was seen across the area.

The incident was brought under control, and no injuries were reported, the New York Fire Department said. The cause was determined to be a "non-suspicious" equipment malfunction, according to a tweet from the New York police's 114th Precinct.

"No injuries, no fire, no evidence of extraterrestrial activity," police said on Twitter.

The sky was lit up in shades of blue visible as far as Manhattan and New Jersey. The tremors shook buildings and rattled windows, sending people running into the streets.

Con Edison said Friday morning that all major transmission lines had been restored.

The incident temporarily closed LaGuardia Airport in Queens. No flights took off between 9:22 and 10:23 p.m. ET, according to FlightAware, a flight-tracking data company.

All terminals were affected by the loss of commercial power, causing the Federal Aviation Administration to issue a temporary ground stop.

LaGuardia resumed normal operations, the FAA said in an advisory on its website.

Con Edison said the airport switched to a backup generator during the transmission disturbance, and all power lines serving the area were in service and the system was stable.

Because all FAA facilities at LaGuardia are on generator power, there was no interruption to air traffic control, FAA spokesman Greg Martin said.

UPDATE: This story has been updated with the latest information on the incident from Con Edison.