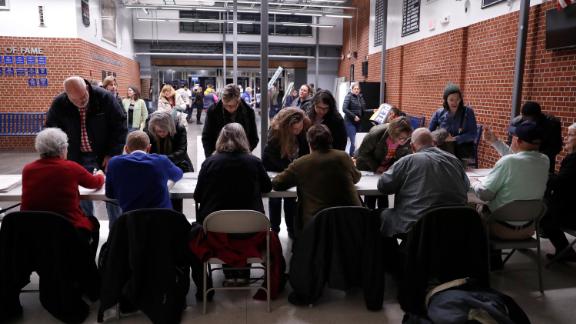 Voters are set to settle a tight four-person contest as Iowa becomes the first state to vote in the 2020 Democratic presidential primary.

Health care emerged as the most important issue for choosing a nominee among Iowa Democratic caucusgoers, according to the entrance polls conducted Monday before the caucuses began.

Two in five chose health care, and about 1 in 5 said climate change, while fewer chose foreign policy or income inequality.

Visit CNN's Election Center for full coverage of the 2020 race

The party has been bitterly divided over health care throughout the primary campaign. Sens. Bernie Sanders of Vermont and Elizabeth Warren of Massachusetts have called for replacing private insurance with "Medicare for All," while candidates like former Vice President Joe Biden, former South Bend, Indiana, Mayor Pete Buttigieg and Sen. Amy Klobuchar of Minnesota have called for a public option while maintaining existing private insurance systems.

Caucusgoers for whom health care is the top issue in choosing a nominee were split between Sanders and Buttigieg, with around a quarter supporting each. Almost 2 in 5 support Warren while 1 in 6 support Biden and the same for Klobuchar.

Among caucusgoers who oppose replacing private insurance with a government plan, 3 in 10 supported Biden, and another 3 in 10 went for Buttigieg. About 1 in 6 in this group supported Klobuchar.

Biden led the field among caucusgoers whose top issue for choosing a candidate is foreign policy, with nearly half of that group backing his campaign. Two in five in this group backed Buttigieg.

Electability mattered to caucusgoers. About 3 in 5 Iowa caucusgoers say they would prefer a nominee who can beat President Donald Trump over a candidate who agrees with them on the issues. Among those, a quarter are supporting Biden and a quarter are supporting Buttigieg. Klobuchar, Warren and Sanders each drew support from about 1 in 6 of this group.

Almost 9 in 10 Biden backers say they prefer a candidate who can beat Trump over one who agrees with them on the issues. The only candidate in the top five whose supporters prioritize agreement on the issues over beating Trump are those backing Sanders.

Almost half of Iowa caucusgoers under 30 years old supported Sanders, significantly higher than any other candidate among young voters, according to preliminary entrance polls. Young caucusgoers made up a similar share of the Iowan electorate on Monday as they did in 2008, the highest mark in entrance polling stretching back to 2000. Fewer than 1 in 5 back Buttigieg and 1 in 10 support Warren.

Almost 3 in 10 Democratic Iowa caucusgoers are over 65 years old, roughly even with 2016. A third of them support Biden, 1 in 5 back Buttigieg and 1 in 5 support Klobuchar.

Caucusgoers who described themselves as "very liberal" went overwhelmingly for Sanders and Warren. More than 2 in 5 support Sanders; more than a quarter support Warren. Fewer, around 1 in 10, support Buttigieg.

Among moderate Democratic caucusgoers, a quarter each supported Biden and Buttigieg. Almost 2 in 10 support Klobuchar.

Overall, about a quarter of caucusgoers are very liberal, 2 in 5 identified as somewhat liberal and a third as moderate.

More than a third of caucusgoers made their minds up late

More than 4 in 10 decided who to support before January.

The Democratic entrance poll estimates how much support a presidential candidate has at the start of the caucus process and will more closely reflect the first round of voting. It does not reflect the final caucus result, which is used to calculate the state delegate equivalents that a candidate is expected to win.

The top finisher in the Iowa Democratic caucuses has gone on to win the nomination in 7 of 9 contested races since 1976.

Entrance polls were conducted among Iowa caucusgoers as they entered precincts Monday night. Edison Research conducts the poll for the National Exit Pool, a consortium of news organizations.

This story has been updated with the latest entrance poll data.

A man was showing symptoms of coronavirus, but came to the hospital to see his partner give birth

Oregon confirmed cases of COVID-19 rise to 736; officials promote staying at home into May

OSAA will not cancel Spring championships yet

Truck drivers are not slowing down during pandemic