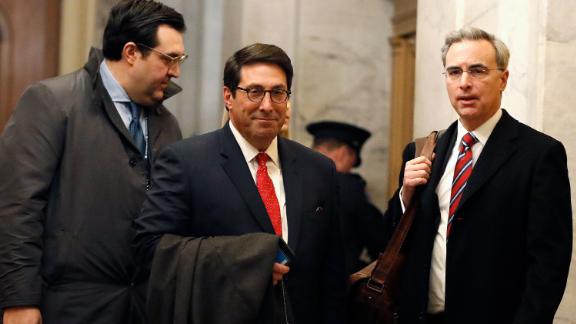 White House lawyers argued Democrats have not met the burden of proof, and said President Donald Trump "did absolutely nothing wrong."

President Donald Trump's legal team opened its defense Saturday by focusing -- mainly -- on pushing back against the two articles of impeachment levied against him: abuse of power and obstruction of Congress. White House counsel Pat Cipollone, who led the team, maintained a calm, measured demeanor -- in marked contrast to the accusatory, aggrieved tone he and his colleagues adopted during last week's highly charged procedural debate.

Don't be lulled by the legalistic veneer offered by Trump's team on Saturday. They're already spinning deception, and likely setting the table for more inflammatory attacks to come. The arguments Trump's lawyers advanced Saturday largely fall flat, running the gamut from marginally convincing (at best) to transparently flimsy, outright misleading and disingenuous.

Here's a rundown of the primary arguments we heard from the Trump legal team on day one of its three-day opening presentation.

Argument 1. The Ukrainians didn't know about the freeze on aid and felt 'no pressure' from Trump.

On the first point, there is compelling evidence that the Ukrainians knew of the freeze on nearly $400 million in foreign aid as early as late July 2019.

As for the second point, Ukrainian President Volodymyr Zelensky has stated publicly he felt "no pressure." But of course he said that -- he had to. What was he going to do? Publicly announce he feared Trump, potentially alienating the leader of the world's most powerful country as Ukraine struggles to establish democracy and fend off Russia?

I've prosecuted more extortion cases than I can remember and, in my experience, victims almost never say they felt pressure -- precisely because they fear the consequences of standing up to the extorter.

Zelensky later hinted at this, stating, "But you have to understand. We're at war. If you're our strategic partner, then you can't go blocking anything for us." Indeed, the withheld aid comprised nearly 10% of Ukraine's entire military budget, while that nation was at war with a neighboring power, Russia. It is misleading and disingenuous of Trump's attorneys to cling to this patently ridiculous defense.

This one relies on sleight of hand. As President, the argument goes, Trump had the right to take steps to prevent corruption in Ukraine, a recipient of foreign aid. Fine -- he would have been within his right to fight corruption. But that's simply not what happened.

In fact, Trump pushed Zelensky for two, and only two, investigations -- one on former Vice President Joe Biden and his son Hunter Biden, and another into a discredited theory that Ukraine, not Russia interfered in the 2016 election. And the evidence makes clear that Trump seemed to care less about the actual investigations than the public announcement of investigations -- which would serve his own political goals, and not actually combat corruption.

Tellingly, Trump has a dismal record on fighting corruption, and has repeatedly tried to cut spending on anti-corruption programs in Ukraine and other countries. When asked in October 2019 to name any corruption case he had ever pushed for beyond those involving his political opponents, Trump responded: "We'd have to look."

Argument 3. Evidence of the corrupt exchange (or 'quid pro quo') was largely speculative and based on presumption.

This argument has some merit. Indeed, much of the evidence introduced in the House was based on the presumptions -- usually reasonable and well-founded and based on experience, but presumptions nonetheless -- from witnesses including former US Ambassador to Ukraine Bill Taylor, Alexander Vindman, a top Ukraine expert on the National Security Council, and US Ambassador to the European Union Gordon Sondland.

But, first, that argument ignores firsthand evidence including, most importantly, the damning rough transcript of the July 25 call between Trump and Zelensky in which Trump stated, "I would like you to do us a favor though..."

Second, the "no direct evidence" claim underscores the need to hear from witnesses who would have firsthand knowledge of Trump's intent, including former national security adviser John Bolton and Mick Mulvaney, who heads the Office of Management and Budget and serves as Trump's chief of staff.

Trump's defense team made other arguments, too. Here's the lightning round:

--They're trying to overturn the election: No, the Constitution provides for both elections and impeachment to remove corrupt officials from office

--Trump was unfairly investigated by special counsel Robert Mueller and was cleared: To the extent Mueller is even relevant at all here, he found that the Trump campaign welcomed, encouraged and "expected it would benefit electorally from information stolen and released through Russian efforts"

Notably absent from Saturday's presentation were some of the more inflammatory, dramatic arguments that seem likely to spark the most controversy. We haven't seen appearances from constitutional lawyer Alan Dershowitz or former independent counsel Ken Starr yet.

No laughable, disproven arguments that impeachment must be based on a statutory crime (though that likely will come when Dershowitz takes the podium) have been introduced so far. There haven't been any assaults on the Bidens (for now). Those fireworks may be coming on Monday and Tuesday, but for now the defense has kept its powder dry. For now.

Climber dies after fall on Mt. Shasta despite rescue attempt

Governor Brown issues moratorium on evictions through the end of 2020