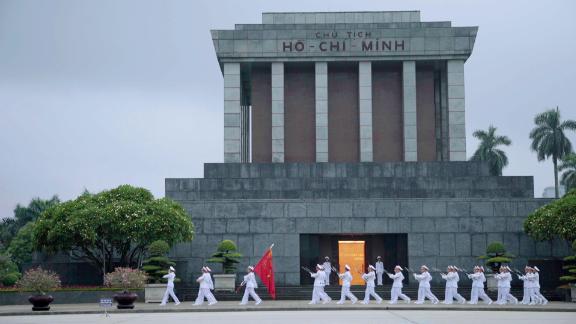 Ho Chi Minh died 50 years ago, but people still line up to see his body.

Tran Thi Bao traveled all night by bus to make it to the Ho Chi Minh Mausoleum in time for the 6 a.m. flag raising ceremony.

On this September morning, a steady rain persisted. At 5:30 a.m., a mere 90 minutes after Bao and other faraway travelers arrived in Hanoi, the sky was dusty gray with barely a hint of sun.

Getting to Hanoi from Long San Village in Nghe An province in north-central Vietnam is a seven-hour ride on mostly rural roads. But to Bao and her group of fellow Vietnamese citizens, it's a necessary journey to honor their late leader.

To foreign travelers, it's a solid Hanoi tourist attraction that offers valuable insights into Vietnam's history, values and culture.

Ho Chi Minh, considered the father of Vietnam and the founder of its Communist Party, is a lauded figure among the Vietnamese, while he remains a controversial subject to those who don't support communism.

Ho served as the president of North Vietnam for 25 years; his powerful reign in the communist country symbolizes the struggle of the Vietnamese people's fight for independence from the anti-communist regime in the south and from that regime's southern allies, including the United States.

Uncle Ho, as the former Communist Party leader is often endearingly referred to by Vietnamese, is an important historical figure, and the Vietnamese people largely consider a visit to the mausoleum an honor -- well worth the long journey many citizens endure.

While tracking down actual visitation numbers isn't easy -- government officials told CNN Travel they don't have a hard statistic to offer -- it's well over one million each year.

Because Ho died 50 years ago on September 2, 1969, 2019 is a big anniversary year for the people of Vietnam, and foreign travelers will likely encounter lots of local travelers in the capital as a result.

Bao had traveled with others from her community to "express our love and appreciation to the great father who recovered the freedom and independence for our country."

She and many others gathered in the vast area in front of the looming, concrete mausoleum, the massive gray structure awaiting the military's daily flag processional, a lively, atmospheric gathering of military personnel marching in sync to music.

Hanoi, with its fragrant street eats, picturesque Old Quarter and pretty Hoàn Kiếm Lake, is often a jumping off point for travelers in Vietnam and thus filled with foreign travelers.

Ba Dinh Square, however, the area surrounding Ho Chi Minh's Mausoleum, not far from the capital city's bustling Old Quarter, is strictly business. A few vendors behind the Mausoleum and not in the square itself sell pho and cans of soda later in the day, but it's a far cry from Hanoi's main artery.

Security outside the mausoleum is tight, and signs every 20 feet or so caution visitors in both Vietnamese and English: "Do not go this way," "No chewing gum," "Restricted area no trespassing."

The appreciation and reverence for Ho Chi Minh is palpable among the people -- mostly Vietnamese -- who've gathered at the early morning hour and queue in an orderly fashion, waiting for entry to the mausoleum.

"The purpose of this trip," Bao explains, is "showing our heart to Uncle Ho." She will have approximately 60 seconds to do so.

Entry is both free and fleeting. But for visitors like Bao and Tran Dai Loi -- a veteran of the 1955-1975 conflict involving American and Vietnam -- who also traveled from Nghe An province, the birthplace of Ho, the impossibly brief time doesn't seem to be a source of frustration.

A few minutes before 7:30 a.m, when the Mausoleum opens, visitors line up within barricades. This is only after going through security, where water bottles and cameras are flagged; neither are allowed in the sacred space.

Loi visited once before in 1979 but says he would come every year if his health and financial situation allowed. Calling Hanoi the country's heart, Loi credits Ho with the beautiful, happy life possible in Vietnam now.

Like the women, Loi is also dressed respectfully, in military attire proudly displaying his war medals, including one with Ho Chi Minh's picture, which he says is the medal of Vietnam military veterans.

Bao and Loi have traveled with a group of 20 or 30 from a former teacher association and youth volunteer, many of whom are elderly.

"We are all old now," Bao says, underscoring the importance of making the trek to pay homage while they still can.

The 50-year anniversary, of course, is also an impetus for their visit.

A red carpet leads visitors inside the building and to the cool, dark room where Ho's body resides. There's a damp, heavy silence inside the chamber; people's footsteps on the thin carpet mostly muffled.

Ho is flanked by four guards, and there are five other stoic officials monitoring the room as well. As visitors file into the hall, many offer a small bow to Ho's right side, waiting for their turn to face the body, which rests peacefully in an elevated glass case with soft, yellow lights.

This positioning provides an opportunity to bow facing Ho and express appreciation -- or, if you're a curious foreigner, attempt to get a closer look.

Any attempts to linger will be quickly thwarted as a guard overseeing this key area will hasten to let you know with a pat on the shoulder that it's time to move on. Visitors don't so much as stop in front of Ho as slow their pace, pausing for a millisecond before being urged onward.

When all is said and done, visitors are inside the main hall for barely a beat. And there is nothing else to see in the mausoleum, though the grounds are worth exploring if you like flowers and wide-open spaces.

This strict order, however, comes with a silver lining. The line outside -- rain or shine, though most of it is covered -- can grow quite long, but it moves quickly, and everyone who wishes visit will likely have a chance to pass through before the mausoleum closes at 10:30 a.m. Tuesday-Thursday, and 11 a.m. on weekends. (The mausoleum is closed Mondays and Fridays.)

This leaves the rest of the day to explore Hanoi. There's a lot to see in the nation's capital, and after a quick visit to the mausoleum, the Ho Chi Minh images and references you're sure to encounter during the rest of your visit might even take on new meaning.

Missing twins from Vancouver located and found safe in Yreka

Wolf tracked near Yosemite park for first time in 100 years

Understanding the fragility of the 2021 spring sports season

Learning about turkey hunting and surfperch fishing in Oregon

65 and older eligible and vaccine clinic

Oregon State upsets No. 14 Oregon to end the regular season