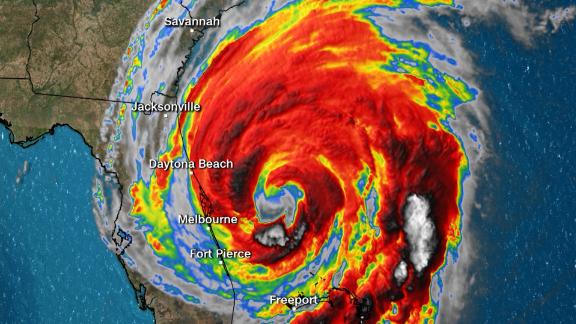 Hurricane Dorian heads up the eastern coast of Florida and will likely make landfall in the Carolinas later this week, after causing catastrophic damage to the Bahamas.

As Hurricane Dorian continues moving up the southeastern US coast, South Carolina was feeling its effects Thursday morning.

The storm had lost some of its strength after hitting the Bahamas. But it intensified again into a Category 3 storm Wednesday night, with maximum sustained winds of 115 mph, according to the National Hurricane Center.

Dorian is expected to continue moving closer to the coast of South Carolina throughout the day and then along or over the coast of North Carolina Thursday night into Friday, the National Hurricane Center said.

More than 1 million people in parts of South Carolina and North Carolina are under mandatory evacuation orders, forecasters said.

The South Carolina cities of Charleston, North Charleston and Mount Pleasant are under a flash flood warning until 10:15 a.m. ET, the National Weather Service in Charleston said Thursday morning.

Hurricane Dorian is expected to bring between 15-20 inches of rain along the South Carolina coast, including downtown Charleston, through Thursday afternoon, meteorologist Steve Rowley with the National Weather Service in Charleston office told CNN.

The storm's eye wall is forecast to pass less than 40 miles from the Charleston County coast, he said.

South Carolina Gov. Henry McMaster declared a state of emergency on Tuesday, and the hurricane center warned of "life-threatening storm surge and dangerous winds, regardless of the exact track of Dorian's center."

Charleston mayor John Tecklenburg said that he wants the city to be a "ghost town" during the storm.

"Just stay put for another six or eight hours until this passes, and then we're going to clean up and get back to normal quickly," Tecklenburg said.

State, federal and local agencies at the State Emergency Operations Center are working together to prepare evacuation and recovery efforts in anticipation of Dorian, according to a tweet from the South Carolina Emergency Management Division.

A hurricane warning is in effect from north of the Savannah River up to the North Carolina-Virginia border.

"We need people to evacuate," he said. "This is not a storm to mess with."

A state of emergency has been declared for 21 Georgia counties.

More than 9,1000 customers along coastal Georgia were without power Thursday, with the bulk of the outages around the Savannah area, according to Georgia Power.

"Current predictions indicate that it may affect parts of Virginia," Gov. Ralph Northam said. "I am declaring a state of emergency to ensure that localities and communities have the appropriate level of assistance, and to coordinate the Commonwealth's response to any potential impact from Hurricane Dorian."

Dorian is expected to remain a hurricane over the next few days, the hurricane center said Thursday morning.

Before its march toward the Carolinas, Dorian had been forecast to strike Florida the hardest. But it changed paths, wreaked havoc on the Bahamas and has so far not caused significant damage along Florida's coast.

Although the state avoided a direct hit, three Florida residents died in incidents related to storm preparation, including a 55-year-old Ocoee man who fell while trimming trees around his house, local officials reported.

As Dorian spins along the southeastern US coast, another storm is churning in the Atlantic.

The storm is not expected to strengthen over the next couple days and, but could slowly intensify by the weekend, the hurricane center said.