On the exact same day 42 years ago, a New York power outage turned into a crime rampage 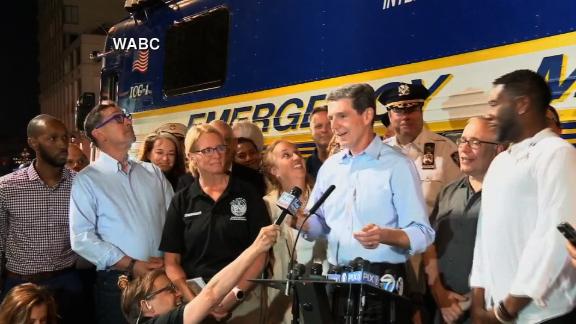 People cheer as power is restored in the middle of a news conference held by Con Edison to address the blackout affecting parts of Manhattan.

The outage plunged 73,000 people into darkness in Midtown Manhattan and the Upper West Side on Saturday night. It left people trapped in trains and elevators and the bustling city lit up by cellphone.

But this wasn't the first time a major power outage has hit the city on the exact same date. In 1977, in the beginning of a stifling heat wave, a 25-hour blackout sent the city into havoc.

LIVE UPDATES OF THE OUTAGE

Blackout decades ago turned into a night of crime

During the blackout decades ago, people did not help guide traffic and take it in stride -- like they did Saturday. Back then, a crime rampage broke out as people filled the pitch-black streets, looting and setting stores ablaze.

All across Queens, Brooklyn, Manhattan and the Bronx, more than 1,000 fires were set -- 60 of them major. Nearly 2,000 properties were vandalized, two people died and 436 police officers were injured, a government study says.

"For the looters, vandals and arsonists, it was Christmas in July, a fiesta, a carnival, a holiday," Milton Lewis with CNN affiliate KABC said.

In the span of one day, there were close to 3,000 arrests, a study commissioned by the division of Electric Energy Systems and the Department of Energy states.

"In the areas hit worst by the looting and vandalism, the vast amount of refuse, garbage and spoiled food required the addition of 82 sanitation trucks and 4,000 workers to cope with the clean-up operation," the study says.

Back then, the system collapsed for several reasons

The 1977 blackout was caused by a combination of events.

Thunderstorms raining over the city that night triggered malfunctions in the Con Edison system, which eventually blacked out. Con Edison's system collapsed from a combination of natural events, equipment malfunctions, questionable system design features and operating errors, according to the Federal Energy Regulatory Commission.

"Of paramount importance, however, was the lack of preparation for major emergencies such that operating personnel failed to use the facilities at hand to prevent a systemwide failure," the commission says.

That blackout had an estimated cost of $350 million, according to the study.

A 12-year-old boy left his dog outside a shelter. A heartbreaking note explained why

CDC has confirmed 35 cases of novel coronavirus in the US

2020 US Census could mean more money for Oregon

Sportsmen's and Outdoor Recreation show kicks off today at the Expo