NASA's plan to keep the Voyager spacecraft awake and flying 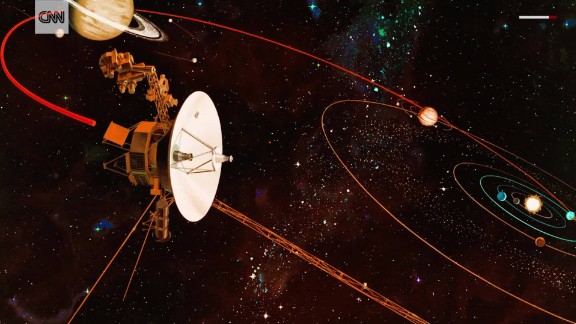 #TBT to the launch of Voyager 1 and 2, which have been exploring space since 1977, and still communicate with NASA from the interstellar frontier.

NASA's Voyager 1 and 2 are the longest-flying spacecraft in history; 42 years after they launched, both are still going strong and sending back data as they explore interstellar space. It's the farthest we've ever pushed into space. And the spacecraft were initially designed to last only five years.

But this record-setting feat wouldn't be possible without the engineers who have had to make crucial decisions that keep the twin spacecraft going. Now, they have a new plan that will keep Voyager 1 and 2 awake and operating so scientists may continue to receive vital data about a part of space we've never explored.

One struggle is maintaining power, which is needed to keep science instruments running as well as the heaters that will keep them from freezing in deep space. Both probes are now more than 11 billion miles from the sun, which makes the heaters crucial for maintaining functions. If fuel can't power the thrusters that make sure both probes orient their antennae toward Earth, engineers wouldn't be able to receive data or communicate with the probes.

Over time, power system efficiency has decreased, and the generators produce 40% less than they did at the time of launch.

The thrusters on both spacecraft are also degrading. They send out small puffs that keep the spacecraft oriented, meaning their antennae are still directed at Earth. Voyager 2 will soon fire up another set of thrusters last used during its flyby of Neptune in 1989. Engineers did the same thing with thrusters on Voyager 1 in 2017.

Voyager 2 is the main priority for receiving new plans because it's collecting more data with an instrument that isn't working on Voyager 1. It's also using more power, so engineers turned off a heater for the Cosmic Ray Subsystem. That instrument dropped to minus 74 degrees Fahrenheit, but it's still sending back data. This is remarkable considering that the instrument was initially tested at only minus 49 degrees Fahrenheit.

"It's incredible that Voyagers' instruments have proved so hardy," Voyager Project Manager Suzanne Dodd said in a statement. "We're proud they've withstood the test of time. The long lifetimes of the spacecraft mean we're dealing with scenarios we never thought we'd encounter. We will continue to explore every option we have in order to keep the Voyagers doing the best science possible."

The Cosmic Ray Subsystem was key in communicating when Voyager 2 crossed into interstellar space last year.

That boundary where hot solar wind meets cold interstellar space is called the heliopause. Mission scientists compared data from instruments on Voyager 2 to determine that the date of the crossing was November 5, when the solar wind particles around the probe dipped greatly.

"There is still a lot to learn about the region of interstellar space immediately beyond the heliopause," Voyager project scientist Ed Stone said in a statement at the time.

Voyager 1, launched just a few weeks after Voyager 2, crossed the boundary in 2012 to exit the heliosphere, a bubble of magnetic fields and particles created by the sun.

However, just because the probes have left the heliosphere doesn't mean they have left our solar system. That boundary is the outermost edge of the Oort Cloud, a group of small objects influenced by the gravity of our sun.

The mission scientists believe that it would take Voyager 2,300 years to reach the inner edge of the cloud and 30,000 years to fly past it completely.

Voyager 2 carries something unique: two Plasma Science Experiment instruments. Voyager 1 has one of them, and it stopped working in 1980.

They will be able to take unprecedented observations in this part of interstellar space and send them back to mission scientists. The scientists can still communicate with Voyager 2, even in interstellar space, but the data takes about 16.5 hours to travel back to Earth.

Learning about interstellar space also allows for insight about radiation, which is key for informing manned missions deeper in our solar system.

Voyager 2 is sending back data from its five operating instruments that provide insight about fast-moving particles, plasma and clouds of material in interstellar space. Voyager 1 is also returning data from similar instruments.

With the new plan to save power and orient the spacecraft, the engineers expect that Voyager 1 and 2 will still send back data for at least the next few years.

The data gathered by the probes has helped inform NASA's Interstellar Mapping and Acceleration Probe, scheduled to launch in 2024.

"Both Voyager probes are exploring regions never before visited, so every day is a day of discovery," Voyager Project Scientist Ed Stone said. "Voyager is going to keep surprising us with new insights about deep space."

A father's concealed weapon went off when he was play-wrestling with his toddler, police say. Both were shot in the head

A 97,000-gallon red wine leak made its way into a Northern California river

Pet of the Week: Deuce