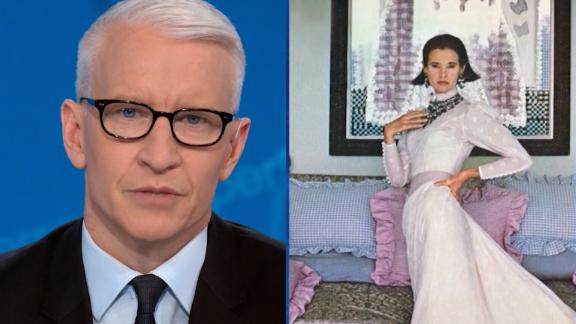 CNN's Anderson Cooper delivers a moving farewell to his mother, Gloria Vanderbilt, who passed away on June 17 after battling cancer.

Anderson Cooper delivered a touching tribute to his mother, describing their final moments together before she died in the predawn hours after a cancer diagnosis just days earlier.

During his show "Anderson Cooper 360" on Thursday night, he said she found out on June 8 that she had an advanced form of stomach cancer.

"She lived nine more days," he said. " ... Being able to spend those nine days and nights with her was a great, great blessing. They were the most extraordinary days of my life and I'm very grateful."

Vanderbilt died shortly after 4 a.m. surrounded by friends and family, including Cooper.

"Though I was holding her hand and her head when she took her last breath, it's still a little hard for me to believe she's gone," he said, his voice cracking.

A friend described Vanderbilt as the North Star, a guide and light in the darkness, and Cooper said he realized how much she was that to him as well.

"Right now, things seem a lot less bright and magical without her," he added.

Vanderbilt was the heir to her family's massive fortune, and had two sons -- Carter and Anderson -- with her fourth and final husband, Wyatt Cooper.

Tragedy struck the family in 1978 when Wyatt Cooper died on the operating table during open-heart surgery. The family took another blow a decade later when Carter Cooper, 23, jumped from the terrace of his parents' penthouse in Manhattan. Carter had battled depression.

"My dad died when I was 10, and my brother when I was 21," Cooper said. "She was the last of my immediate family, the last person who knew me from the beginning. They're all gone and it feels very lonely right now. I hope they are at least together."

'She knew me and I knew her'

Cooper said while he misses his mother and the grief is overwhelming, he's grateful he got a chance to make her latter years more fulfilling.

"When I die that might be the thing I'm most proud of. I'm happy that we left nothing unsaid between us. She knew me and I knew her, and there's great comfort in that," he said. "'You and I, it's a match made in heaven,' she said to me last week. 'We're a good team,' I told her. We stayed up late that night just holding hands and when she got sleepy ... she said to me, 'What a wonderful night.' And it was."

Even with her fame and fortune, Vanderbilt would have been stunned by the outpouring of emotion following her death, he said. When she joined Instagram a few years ago, she wasn't expecting anyone to follow her and was amazed that so many people did.

"She didn't think anyone would actually follow her," Cooper said. " 'Why would anyone be interested?' she asked. It wasn't long before she had some 200,000 followers and it tickled her beyond belief."

'Love is what she believed in'

Born in New York in 1924, Gloria Laura Morgan Vanderbilt grew up in France. Her father, financier Reginald Vanderbilt, the heir to a railroad fortune, died when she was a baby.

But despite the wealth, she was, determined to make a name for herself, and turned to modeling. At age 15, she was photographed for Harper's Bazaar, and would go on to appear in Vogue and Vanity Fair.

When she was 17, she married Hollywood agent Pat DiCicco in 1941, a marriage she later admitted was a mistake at the time.

At 21, she took control of a $4.3 million trust fund her father had left her. She got divorced and remarried conductor Leopold Stokowski, who was 63 at the time. She had two sons with him: Leopold Stokowski and Christopher Stokowski.

She found love again with director and producer Sidney Lumet before they got divorced and she later married Cooper's father.

She always believed that her next great love was around the corner. "Love is what she believed in more than anything," Cooper said.

Her relationship with her famous CNN anchor son was memorialized in a HBO documentary, "Nothing Left Unsaid: Gloria Vanderbilt & Anderson Cooper."

The pair also published a joint memoir, "The Rainbow Comes and Goes: A Mother and Son on Life, Love, and Loss."

A majority of COVID-19 carriers could be asymptomatic, including children

Anywhere Learning: I’m Going to be a Kindergartner