After Sarah Sanders, we need a real press secretary 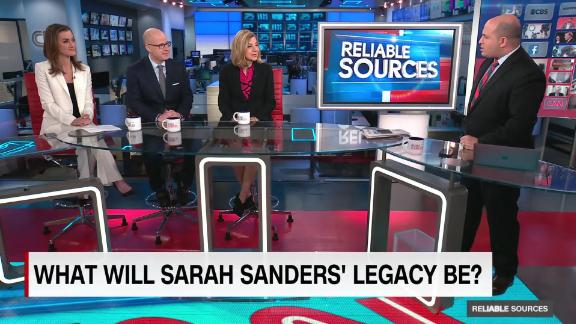 The "Reliable Sources" panel says misleading statements and missed briefings defined her tenure. And Samantha Vinograd asks, "what does it matter who the next press secretary is?"

The announced departure of White House Press Secretary Sarah Sanders has set off a debate about her tenure working for President Donald Trump. Some see her as a loyal defender of an embattled president, while others criticize her for lacking the character to do the job. I wrote on this site that she failed in almost every aspect of the job.

This debate does raise the question of what characteristics make for a successful White House press secretary, one who serves both the president and his agenda and the media as a proxy for the public.

Having served in the job for President Bill Clinton, and having watched others closely over three decades, I've got some idea of what the job takes. Not that I was able to live up to this ideal, but being on the inside did provide a road map of how to succeed in one of the most challenging jobs in the world.

In the age of social media that bypasses the filter of the traditional media, some have argued the job of press secretary is obsolete. I think the example of the Trump presidency makes the opposite argument. When an impulsive president not tethered to any known truth is constantly tweeting, it's the press secretary's obligation to determine the difference between what's on the president's mind and what the reality is.

And as far as the media is concerned, once they know the press secretary is not being straight with them, they have little to no use for them. That limits the spokesperson's ability to do anything to promote the president's agenda, a critical part of the job. Balancing those two jobs is challenging on any given day. It's impossible if you've lost the trust of either the president or the media.

Another important role for the spokesperson is to be what I call the "Secretary of Nuance and Clarification." The building and implementation of policy and politics is a messy business. Competing agendas are coupled with presidents who are often aspirational in delivering facts, hyperbolic in rhetoric and, at times, just plain wrong. The job of the press secretary is to sort it all out among the staff, policymakers and the media. Often, the press secretary has to tamp down what some in the media are reporting as a decision, but is in reality still in the policy and political process.

The press secretary is also the "Senior Internal Investigative Reporter" at the White House. Using the same methods of journalism, running down information and checking it with multiple sources means the press secretary can avoid reporting as news what is just one faction's view on an issue within the White House, or incomplete information from well-intentioned colleagues. Nothing makes a story bigger than the White House having to walk something back. Those walk-backs generally happen because the spokesperson didn't do enough to check things out.

The press secretary should be the strongest advocate for the media in the executive branch. What Mike McCurry aptly calls the press whisperer of the White House, the spokesperson is effectively the internal lobbyist for the press with the president and staff. Most presidents and those who work for them, in all candor and on most days, see the press as an obstacle to what they're trying to get done. It's the press secretary's job to make sure their interests are heard.

I can't remember how many times President Clinton said to me things like, "Oh, you want to do another thing for your friends in the press," emphasis on "your friends." Not only is such advocacy the right thing to do for the functioning of our democracy -- the media at the White House, even in the age of social media, is an important channel to deliver the president's narrative to the American public. It is also important for the spokesperson to make sure the press is treated fairly across the board, avoiding situations such as we have now, with Fox News getting 57 interviews and CNN none. You're the press secretary for the whole country, not just those who voted for you or watch your favorite channel.

The press secretary is also the "Chief Risk Management Officer" day to day at the White House. Their job is to look around the corner to see political landmines before they become obvious. They need an innate ability to anticipate not only what the first question any given reporter would ask the president, but the follow-up and the follow-up to the follow up. The job requires preparing the president to give their best answer the first time they give it to the press.

That often requires having the president unload his worst answer in a private practice session that usually makes him feel better, but would often be counterproductive to promoting his agenda.

With President Clinton, who is a great communicator, we had a short session to go over potential questions he might get any time he appeared in public. A good press secretary needs to know where a story is going before all of the media does.

Most of the attention the press secretary has traditionally received is around the daily briefing, even though it's only part of the job. The most important aspect of these events, which Sarah Sanders has essentially ended, lies in the daily part of it. You have to be out there every day, in good times and in bad times. The ability to take the tough days is what gives you credibility to have the good days. In this job, just showing up is a big deal.

Finally, the press secretary must have the ability to speak truth to power. There is no more powerful person in the world than the president of the United States. His cabinet secretaries and senior staff are also pretty powerful. Anyone who isn't willing to tell the president the things he can and can't say is not right for the job.

Presidents get information from all sorts of people, and it's absolutely true that at times they are misinformed. Self-confident types as they are, they most likely don't like to be told they've got it wrong. The ability to speak directly and forcefully to the president is the press secretary's most important asset, and in the long run a critical asset for any leader, particularly the leader of the free world.

Again, I don't delude myself into thinking I lived up to all of these necessary characteristics, but my experience did teach me what you needed to do the job right -- as opposed to the way it's been done for the last two-plus years.

Medford's Inn at the Commons selling to make way for housing

Costco is shutting down all of its photo centers