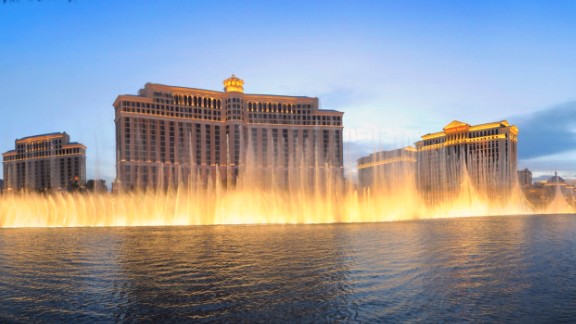 It wasn't quite a George Clooney or Brad Pitt heist, but police say a brazen robbery attempt ended with gunfire and the suspect hospitalized in Las Vegas.

He then fled and tried to steal a vehicle that had just pulled into the valet lot, but he was immediately confronted by four police officers, Splinter said.

The suspect fired his gun and struck one of the officers in the vest. A second officer fired back and hit the suspect, Splinter said.

Both the officer and the suspect were transported to a local hospital, and the officer was treated and released. The suspect is listed in critical condition.

Police said that per their policy, the identities of the officers involved will be released after 48 hours.

The incident brings to mind the movie "Ocean's Eleven." In the film, Danny Ocean (Clooney), Pitt and other accomplices plan a heist on several casinos, including the Bellagio.