The pressure is on Kim Jong Un after failure in Hanoi 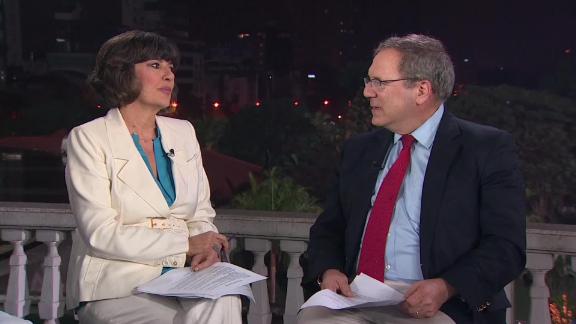 There were encouraging signs leading up to the second summit between President Donald Trump and North Korean leader Kim Jong Un. For his part, Trump signaled a subtle but important shift in his approach toward North Korea's denuclearization -- repeatedly saying, "Speed is not important to me" and "I'm in no rush." This indicated Trump finally was beginning to accept what most nonproliferation experts have been saying all along: That denuclearization of North Korea will be a long and complex process that may last over a decade.

The good vibes continued through the summit, as the usually reclusive Kim showed signs of opening up. Responding directly to questions from American journalists, Kim said if he wasn't willing to denuclearize, "I wouldn't be here right now." Heady talks abounded that a peace declaration was a real possibility, putting US and North Korea on a path toward finally ending the Korean War, which is approaching its seventh decade.

Then, suddenly, it was all for naught. The second day of the summit was cut short, and the two leaders left with nothing to show for it. While the failure to reach an agreement reflects poorly on both Trump and Kim, the implications of the failure loom larger for the North Korean leader.

North Korea and the United States offered competing narratives about how the talks fell through. In the press conference after the meeting, Trump claimed: "Basically, they [North Korea] wanted the sanctions lifted in their entirety," in exchange for dismantling the Yongbyon enrichment site, one of the centerpieces of North Korea's nuclear program.

North Korean Foreign Minister Ri Yong Ho then responded in a press conference of his own, in which he said North Korea offered a "realistic proposal" -- offering verified dismantlement of Yongbyon in exchange for a "partial lifting" of five of the 11 sanctions imposed by the United Nations, in "areas that hamper civilian economy and people's lives." Ri further noted "during the meeting, the United States insisted that we should take one more step besides the dismantlement of nuclear facilities in the Yongbyon area. Therefore, it became crystal clear that the United States was not ready to accept our proposal."

The difference between the two versions of the summit may be less than meets the eye. The UN sanctions that North Korea wanted to lift may not be the whole suite of the sanctions against it, but they do cover a significant range of economic activities, including importation of petroleum. Although North Korea qualified its request as lifting sanctions only in "areas that hamper people's lives," it may have been enough to cause Trump -- who is not known for precision of speech -- to perceive the request as "basically" lifting the sanctions "in their entirety."

It is also notable that Trump said in his press conference, "We brought many, many points up that I think they were surprised that we knew," and referred to another nuclear fuel enrichment site in North Korea in addition to Yongbyon. This may relate to the "one additional measure" that North Korea found unpalatable and pushed the summit to an impasse.

Regardless of what happened behind closed doors, the failure to reach an agreement in Hanoi puts additional pressure on Kim Jong Un to do more, as the unusual confluence of world events that allowed him to come this far may not last much longer. Despite his belligerent "fire and fury" rhetoric, Trump and his unconventional approach to diplomacy represented the best chance for North Korea to win any concession from the United States.

With the explosive testimony of Trump's former personal attorney Michael Cohen detailing Trump's alleged long criminal history (which the President firmly denies), Trump may have less time to focus on Kim moving forward -- as he prepares for what may be some nasty political battles and a re-election campaign.

Should Trump lose his re-election bid, Kim's prospect of normalizing relations with the United States will dim considerably, as prominent Democrats have been skeptical of the attempts by Trump and South Korean President Moon Jae-in to create a peace regime in the Korean Peninsula. In a meeting with South Korean legislators in February, Speaker of the House Nancy Pelosi openly expressed skepticism over the peace process, saying Pyongyang's goal was not to denuclearize, but to weaken South Korea's military preparedness.

Sen. Chris Murphy of Connecticut, normally a liberal stalwart, said a peace agreement with North Korea would be a "catastrophe" unless North Korea essentially denuclearizes in full. While Moon may again step in to play the mediator role (as Trump asked him to do post-summit,) South Korean officials whom I have spoken to have been privately expressing frustrations that North Korea has not been doing enough to move the diplomacy forward.

To be sure, although the window of opportunity for Kim might be closing rapidly, it is still open. In the press conference, both Trump and Secretary of State Mike Pompeo said the United States and North Korea made progress, and they were hopeful for a further discussion. Trump also indicated the United States would not increase sanctions, essentially maintaining the status quo of freeze-for-freeze: The United States will not sanction further and keep the joint military drills with South Korea scaled back (as agreed to in the Singapore summit in June 2018,) and North Korea will not test nuclear weapons or missiles.

Given this, what North Korea does in the next few weeks in response will be critical. The worst Kim can do is to revert to his old habits of getting US attention by resuming the nuclear and/or missile tests. He may dawdle and let this moment go to waste, which would further keep North Korea in the purgatory of sanctions and isolation. Or Kim can take bold, proactive steps -- the kinds of steps that Trump and Moon have taken so far -- to show his good faith and revive the diplomatic momentum. Kim has stated many times that he wanted North Korea to develop and have its people live better lives. This is the moment for him to show he meant what he said.

Missing twins from Vancouver located and found safe in Yreka

Wolf tracked near Yosemite park for first time in 100 years

Oregon's vaccine schedule will next prioritize adults with underlying conditions, seasonal workers, and the homeless

Understanding the fragility of the 2021 spring sports season

Learning about turkey hunting and surfperch fishing in Oregon

65 and older eligible and vaccine clinic

Oregon State upsets No. 14 Oregon to end the regular season