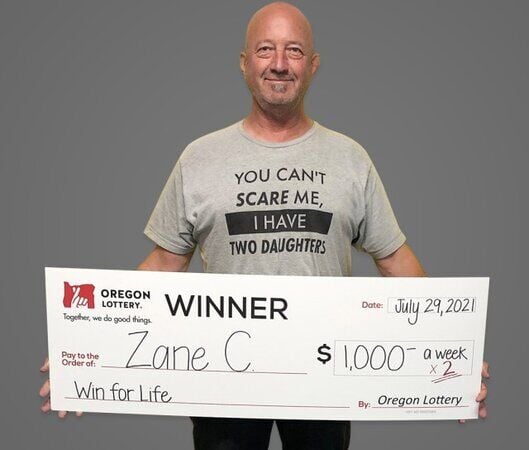 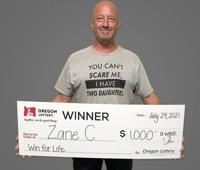 SALEM, Ore. — A Brookings man proved that he's the luckiest guy in town, twice over, after he won the Oregon Lottery's "Win for Life" game with twin tickets.

Zane Collins told the Oregon Lottery that, to his family and friends, he's always been lucky. In July, Collins claimed the top prize in the Win for Life game twice, which means that he'll receive $2,000 per week for the rest of his life.

“I’ve had friends jokingly tell me not get in a raffle or other drawings so they could win,” said Collin.

Collins said that he plays Win for Life regularly, and he usually buys two tickets with the same set of numbers.

“I thought that if I win once, it’s way better to win twice,” said Collins when he claimed his prizes at Lottery headquarters in Salem on July 29.

Collins chose the annuity option for his two prizes, and said he plans to help his two daughters with their nursing school expenses. After taxes, he'll receive two checks each year for the rest of his life totaling almost $70,000.

Lottery officials said that Collins is Oregon's 47th Win for Life top prize winner since the game started in May 2009.

Oregon Lottery reminded players in a statement to always sign the back of their Lottery tickets, regardless of the game. In the event of winning a jackpot, they should consult with a trusted financial planner or similar professional to develop a plan for their winnings. Prize winners of more than $50,000 are advised to contact the Lottery office and schedule an appointment to claim the prize.

The Lottery also recently launched a new online appointment-based system to assist winners of prizes over $600 and below $50,000 "to not only avoid large crowds, but also make the claim process faster and more efficient."

Players can go to Lottery’s website at www.oregonlottery.org to download a winner claim form and schedule a time to pick up their checks at either the Salem or Wilsonville prize payment locations.