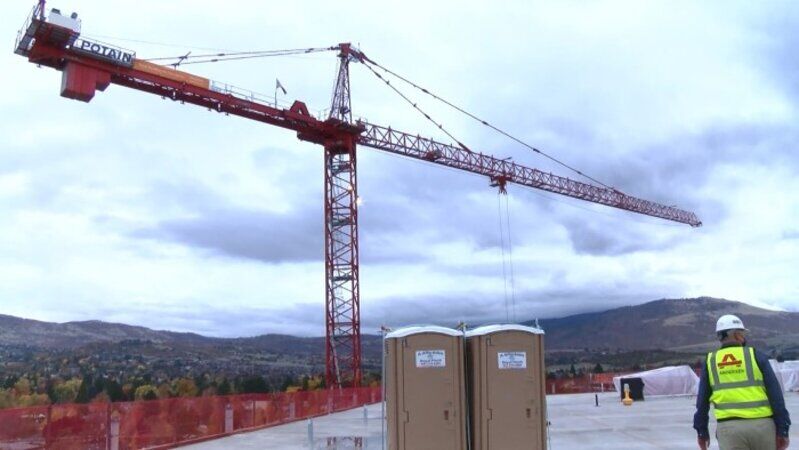 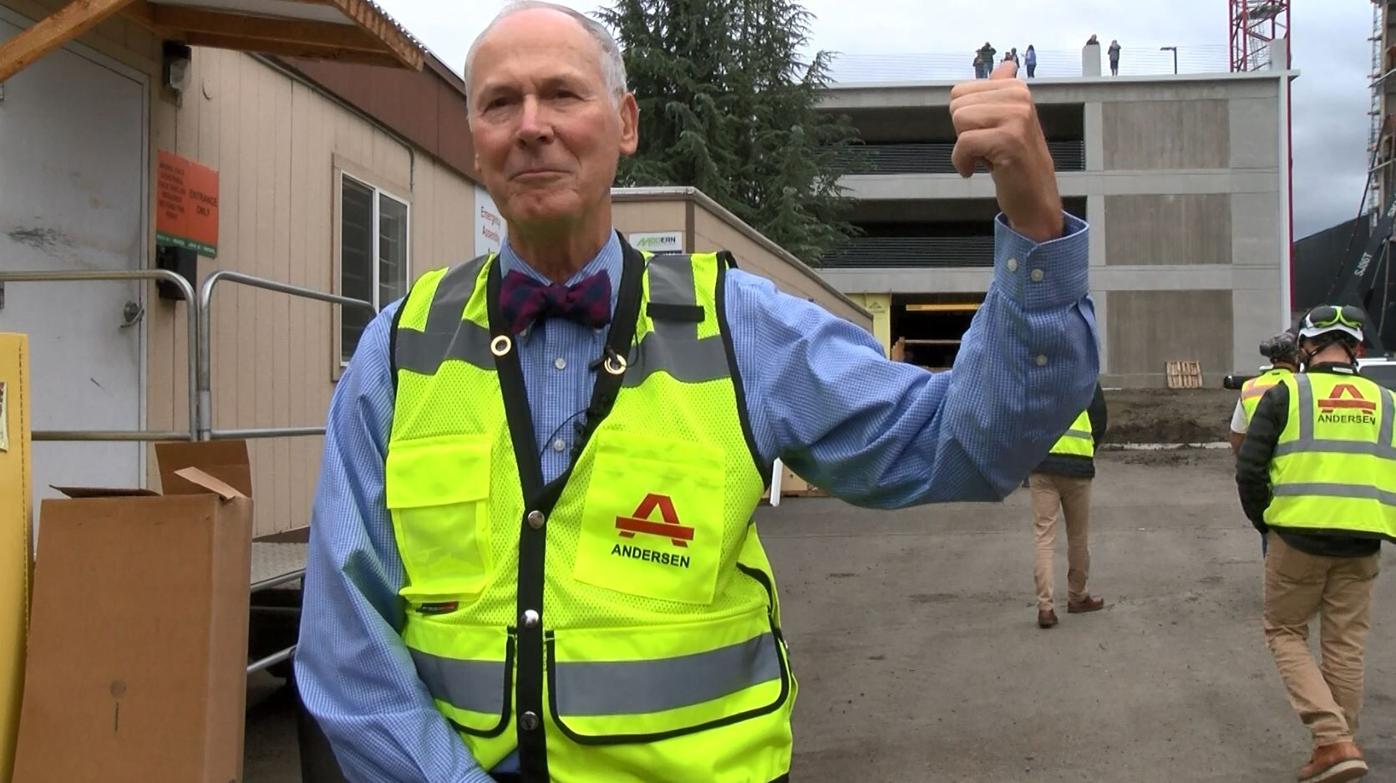 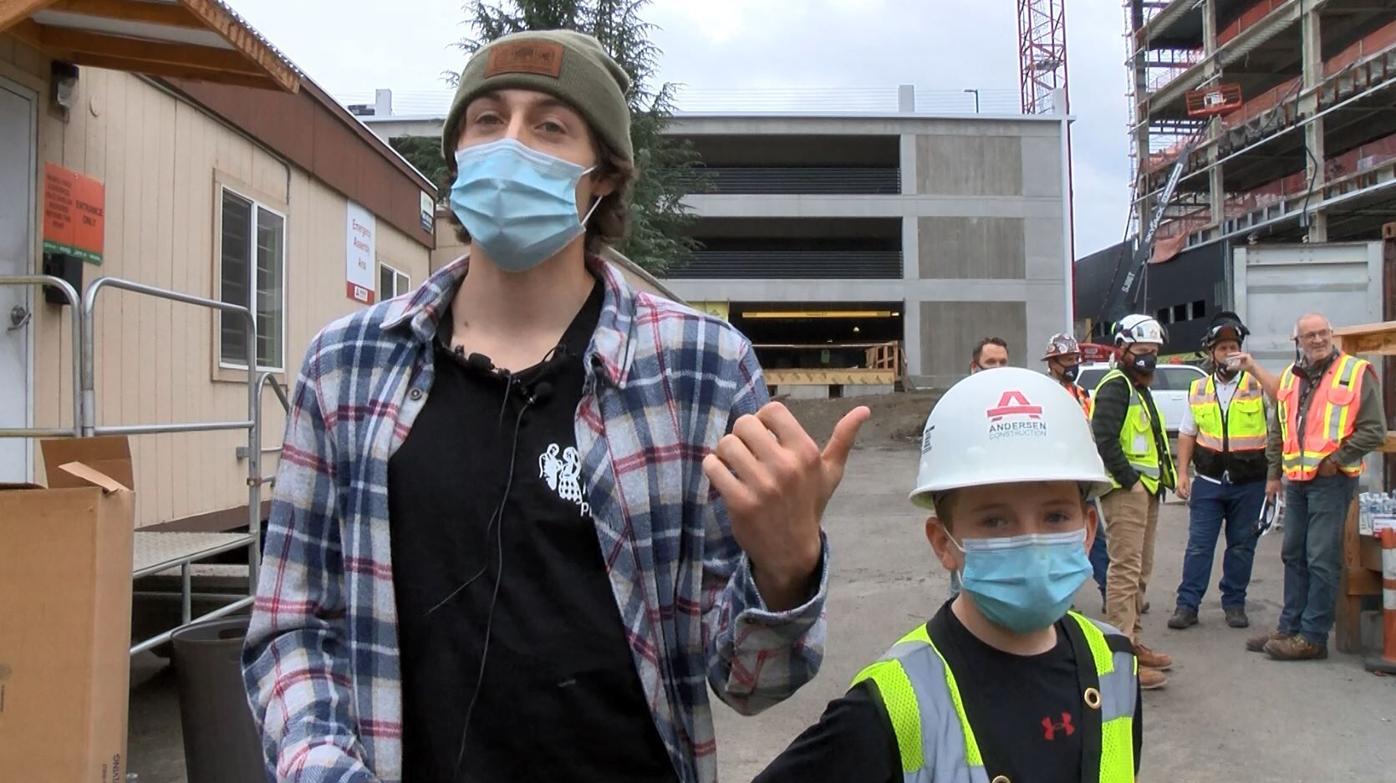 MEDFORD, Ore. — A cardiologist at Asante and a former cancer patient together made the climb up a massive construction crane at Asante Rogue Regional Medical Center on Friday; a reward of sorts for a pair of thrill-seekers, and an event to highlight the hospital's coming expansion.

Dr. Brian Gross is a cardiologist at Asante. During an online auction for the 2021 Oregon Wine Experience, Dr. Gross bought a package for two to climb the crane — one explicitly advertised as "not for the faint of heart."

"Painted bright red, outfitted with LED lights, standing 205 feet above the ground and measuring 353 feet from tip to tail (longer than a football field), with a maximum lifting capacity of 55,115 pounds (enough to lift 300 doctors and nurse or five ambulances), stands Andersen Construction’s tower crane," the package description reads.

The crane is being used to build Asante Rogue Regional Medical Center’s new medical pavilion, where the top two floors will be dedicated to women’s and children’s health.

When Dr. Gross learned that he'd successfully purchased the package, he later reached out to Cameron Caldwell to accompany him.

Caldwell was once a cancer patient at Asante. At 17, while still a high school senior, he went through limb-salvage surgery and intense chemotherapy. He came out the other side cancer-free in June of 2019.

"I thought of a bunch of my friends and colleagues and nurses that I might want to take, I obviously offered it to my wife who immediately rejected it, I offered it to many of my partners who rejected it," said Dr. Gross. "Then I thought — this is an opportunity to really emphasize what we do, when we're not climbing mountains and cranes like this. And so I talked to the Foundation, and I said 'maybe we can get some kid who was a graduate of the Neonatal Intensive Care Unit, wouldn't that be a good one to have?'"

Dr. Gross said that the Foundation did him one better. They pointed him in the direction of Caldwell, who was part of the Children's Miracle Network, beat cancer, and is now a pre-med student.

"And I need somebody strong enough to help carry me up there if something happens!" Dr. Gross said. "But my main job is going to be convincing him that he needs to go into cardiology, rather than oncology."

Caldwell said that he was excited for the change of pace, because he's been inundated with school and work lately, and he wants to help out the community of oncology patients that he was once a part of.

"Any chance to try to help out kids that are going through a tough time," Caldwell said. "I'd like to bring attention to what's going on. And when I found out that the crane was for the new pediatric unit in Asante, I figured 'why not' — what's a small crane compared to a pretty cool setup."

On Friday, Caldwell and Dr. Gross successfully made the climb up to the top of the crane, allowing them to look out over Medford and the future expansion of Asante's campus.

'I thought I was going to die': SOU Senior survives E.coli infection after being hospitalized for several days